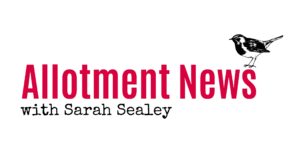 For those of you who aren’t ‘in the know’, as well as being a woman invariably found in an outhouse with a microphone, I can also be found in another shed with a variety of trowels, fruit netting and a tub of slug repellent.

Yes, as well as being a Media Muggle, I am also an (award winning) Allotmentalist.

After years of growing vegetables in pots and my small garden becoming a jungle for 3 months of the year, when I recently moved house, I realised that I could finally achieve a life long ambition- to own an allotment. A bevy of allotment sites near me meant I was able to get my grubby little hands on one fairly quickly, and come February, I became the proud owner of Plot 44.

My 10 poles (thats an allotment term, don’t you know) of weed strewn land was finally mine. I had my work cut out. Within 2 months I managed to work the land, create some (rather fabulous) raised beds and get things ready for sowing season. As neighbouring Plot 43 was also available, I (stupidly) decided to take that on too- so suddenly my barely manageable outdoor space doubled in size and I acquired a greenhouse from Phil the Chicken Man.

Fast forward to this summer, and I’ve literally become Allotment Obsessed- or Allotmental, whichever you prefer.

At last count, I have grown over 20 different types of vegetable and fruit and recently won the much coveted ‘Best Newcomer’ award from the Allotment Association. I received a cheque for £5 as reward for my efforts, with a delightful and quintessentially English note from The Don (Secretary of the Allotment Association) saying ‘don’t spend it all at once’.

I’ve Tweeted, Instagrammed and Facebooked about my allotment for some time and recently decided to film down there to show you, the glorious people, my efforts (and *epicfails). This silly little video was so nicely received that I’ve had calls to make more videos about it, so from here, Allotment News was born!

As I’m also a TV Presenter as well as a Voiceover and Actress, this all ties in quite nicely- being able to showcase both my general muppetry on camera and home grown fayre in one swoop.

So there we have it.

I have recently been crowned ‘Queen of Allotments’ and ‘Mother of Courgettes’ after my infamous Courgetteaddon crop, and look forward to ruling the Seven Kingdoms in the not too distant future.

Peace, love and radishes to you all.